The arrival of hunting season in the fall excites me a little bit, perhaps because it brings promise of interesting and unusual fowl and wild game finding its way into my kitchen. I am not a hunter myself, nor are any of my family members, but I’ve amassed a small-yet-reliable group of friends who are willing to share their trappings with me when hunting season commences. I’ve developed a particular fondness over the past few years for pheasant, so my ears perk up whenever I hear someone mention that they’re headed out pheasant hunting over the weekend. Typically, I offer to buy a bird from a friend—after all, they went to the work of tromping through a corn field in the cold just to get a few birds, so it seems like the least I can offer for something I cannot purchase at my local grocery store. There’s just nothing quite like pheasant’s complex-yet-mild flavor. 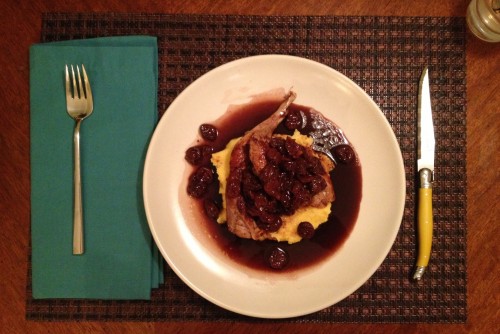 The story of my first pheasant encounter still brings a smile to my face. This was before I knew I liked pheasant. A friend called me on his drive back from North Dakota, and was over the moon with excitement about a pheasant he had gotten that afternoon (he was new to hunting, so this was a big accomplishment). I could hear his wife in the background firmly stating “That bird is NOT coming into our house! Ask her if she wants it.” Ben inquired if I had any interest in taking it off of their hands. My curiosity was piqued by this point, but I didn’t relish the thought of having to clean this creature. After all, birds are dirty, right? I agreed to accept the pheasant under these conditions: It needed to be clean (no feathers!), innards needed to be removed, and no feet. There was a slight hesitation on the phone when I asked if it met these three criteria, but I finally heard a “yeah…ok, we’ll be there shortly.” Compliance…or so I thought.

There was a knock at the door. I opened it to hear Ben’s wife calling out from the car “I’m so sorry!” I looked down at the lunchbox-sized cooler that had been left on the doorstep, and saw two bony little feet sticking haphazardly out from under the lid. Taking a deep breath, I brought it inside (nowhere else to clean it in mid-November!) to my kitchen, and began to inspect the delivery, which was quite a bit different than unwrapping a piece of meat from Whole Foods. For sake of brevity, I will spare you the gruesome details of what ensued over the next hour in my kitchen sink and jump right to the part where I made a memorably delicious meal out of the little creature 24 hours later.

I did some reading on how to get the best tasting results from a wild pheasant, and learned the following helpful tips (all of which I can vouch for!)

So without further ado, I share with you my favorite recipe for pheasant—one that highlights its wonderful natural taste while making use of another locally grown ingredient—sour cherries. Enjoy!

To prepare sauce, combine tart cherries, chicken broth, red wine, vinegar and maple syrup in a 3qt saucepan. Cook over medium heat and allow sauce to reduce by half, approximately 10-15 minutes. A syrupy, thick consistency is desirable. Remove from heat and add butter, then season to taste. Set aside to continue cooling and thickening. 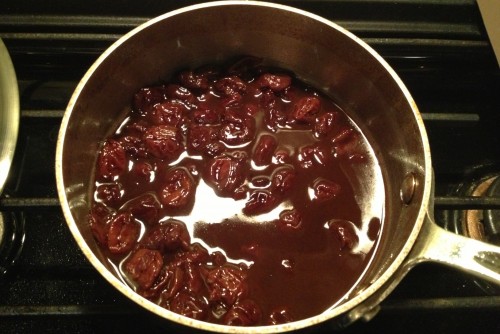 Preheat oven to 325 degrees F. In a nonstick 12 inch saute pan, heat 1-2 tbsp olive oil or butter over medium heat. Pat pheasant cutlets dry with a paper towel before placing into hot oil, skin side down. Sear breast meat 2 minutes on each side, checking for doneness by pressing on meat with a cooking utensil. (They are thin and cook very quickly!) Remove breasts from pan and set aside (they are done cooking). Remove browned thigh/leg pieces from pan and place in a small baking pan in the preheated oven. Finish cooking, which will take an additional 6-8 minutes in the oven. 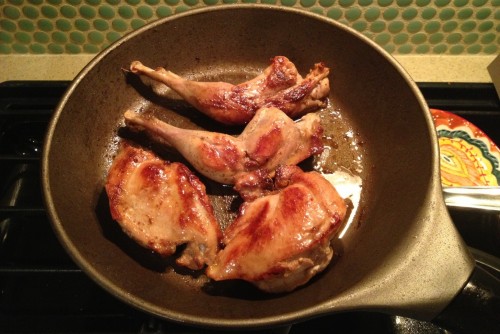 Return cherry sauce to the stove to warm briefly. At the same time, place pheasant breast meat back in the oven 1-2 minutes to re-warm. Arrange pheasant on a plate and pour sauce over each portion (this is best done on each person’s plate rather than on a large platter so that everyone gets sauce!). I like to serve this with a simple soft polenta and a grating of parmigiano-reggiano cheese. 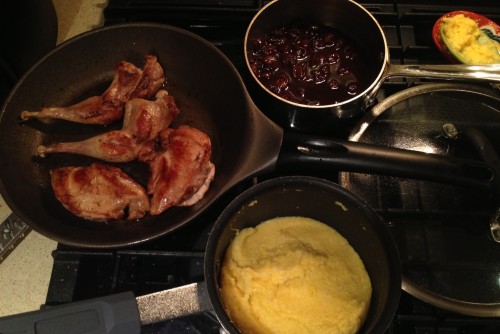