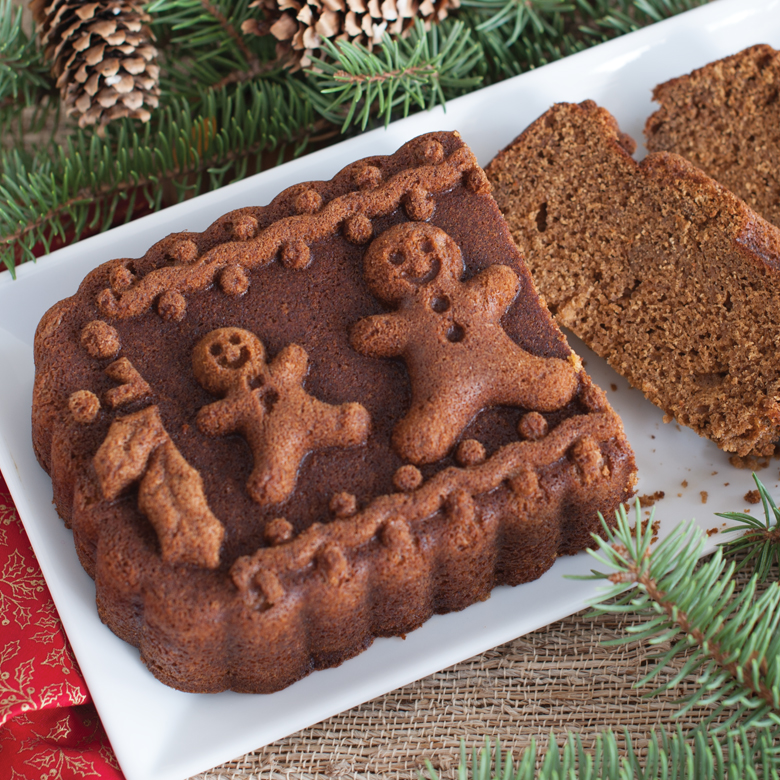 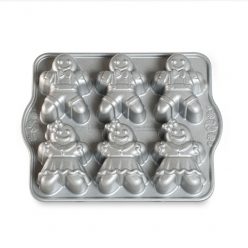 Preheat to 350° F. Prep pan with shortening and flour or with baking spray. Combine flour, soda, salt and spices. Set aside. In a small bowl combine buttermilk and vanilla. In mixer bowl, cream butter and brown sugar. Beat in molasses and add eggs one at a time. Beat until well mixed. Add 1/3 of dry flour mixture, then 1/2 of the buttermilk mixture. Repeat this step, adding 1/3 of flour mixture and the second 1/2 of the buttermilk. Finally add the last of the flour and mix until smooth. Pour into prepared pan. Bake until done, about 45 minutes. Cool cake on rack for 10 minutes and then turn out onto rack to cool completely.

I read reviews about baking this in the cake pan with impressions. I have Santa’s sleigh. I reduced the baking soda to a scant. Everything else was the same. Used baking spray with flour. Used a small silicon brush to get nooks. Came out perfect.

I made this today for the first time in the Gingerbread Family pan it was designed for. I used fresh baking soda. I used a whisk and later a spoon instead of an electric mixer. I filled a single cupcake size for a test and then used the rest of the batter for the pan.

The cupcake sank in the center as did the gingerbread in the baking pan. I had to bake the cupcake 5 minutes more than normal and I gave the baking pan an extra 10 minutes. The taste is good, but the center where the dough sinks is denser than the rest. Is it possible this recipe needs more flour?

The good news is that when you flip the pan to display the design it looks nice. But when you eat it, it you notice a texture difference. Here’s hoping NordicWare amends the recipe.

Agree with several previous reviews regarding batter sinking. I must say that the end result taste testing was excellent gingerbread; however, the baking was a total disaster! I used NordicWare mini bundt cake pan and the maple leaf molds and for both of these vessels, I had to spoon out the baked results and we ate delicious crumbs! During the baking I had overflows in both cases, especially the bundt pan which should’ve been just half-filled and the maple molds as well. The sugary top gives a nice crispy outer coating to the gingerbread for perfect flavor, but the ratio of molasses to flour seems off, making the batter sticky/runny. I did the butter and flour coating but there was no way to remove any kind of pretty baked product! I wish I could post my photos here…The sugary top/overflow had to be chissalled off the outside of the bundt pan.

Warm gingerbread served with melted butter and whipped cream is a tradition going back over 60 years in our family. This recipe is one of the best I’ve ever used. I used the Nordic Gingerbread pan and this recipe for the first time last Christmas and it turned out perfectly. It was easy and had a great flavor. It was such a hit with the family, I’ll definitely make it again this year.

I decided to bake a bunch of “Santa’s Sleigh” loaves as Christmas gifts this year.
When I first tried this recipe and the cakes sank in the middle…EVERY SINGLE TIME! They sank not just a little bit, but enough that the decorative scene on the bottom was so saggy so I could not give it as a gift. (It still tasted great, by the way, so many of my test loaves, I sliced up and took to church receptions. The flavor was/is great and I received many compliments.
I asked my expert baking friends what I could be doing wrong, and they suggested that I was overbeating the initial butter/sugar/molasses mixture. (I was using a Kitchen Aid mixer). I cut back drastically on how long I creamed the butter and sugar/molasses, and it didn’t seem to change anything.
I called Nordic Ware’s customer service representative, and although she was very polite, friendly, and easy to talk to, she said that they had not received any comments (other than mine) about this recipe falling in the middle, so she had nothing constructive to add. (N.b.: in looking at the comments, I see that I am not the only one to have cakes fall.)
Next, I bought a new box of baking soda, thinking that my existing baking soda might be stale. It made no difference.
Finally, I found a different recipe with a different cups to grams conversion factor, so I changed the amount of flour I was using (I usually convert to grams or ounces and weigh my flour…it takes away a lot of guesswork and compensating for local humidity, etc…). 235 grams of flour, and 210 grams of brown sugar (by the way, it really didn’t make a noticable difference if I used light or dark brown sugar) seemed to be the right amount.
The other thing I did, was to take the mixing bowl off the mixer and combine/fold in the dry ingredients and buttermilk by hand. I baked each loaf for 53 minutes at 350 in my oven, and they turned out just fine. There was usually just the little bit of sinkage at the center, but not enough so make the loaf sag when turned over. Ultimately I made about 10 “test” loaves, and then when I finally got the recipe right, I made and decorated 20 loaves to give away.
Hint: to properly prepare pan, and to guarantee a good release, I sprayed with “Baker’s Joy” cooking spray with flour in it, and then used a pastry brush to make sure all the nooks and crannies were coated. I cleaned and regreased the pan for each loaf and had no problems with the cake releasing.
Bottom line: This recipe really does tastes wonderful, but has a strong tendency to fall. Either the directions should be altered to put more insistence on hand mixing at the end, or a different ‘mixer-friendly’ recipe should be developed so that novices won’t be discouraged by a sunken first-try gingerbread loaf.

Revision to earlier review: I think what I did wrong was to add the entire recipe of batter to the loaf pan. Adding enough batter to fill only slightly more than half of the pan worked perfectly!

This cake has a wonderful flavor, dark, rich color, and is nice and moist. It fits perfectly in the Nordicware Gingerbread Family loaf pan. I used skim milk and vinegar in place of the buttermilk and I wonder if this is the reason my loaf sank in the middle? Would whole milk and vinegar have worked better? Or maybe I should have waited until I had buttermilk. At any rate, I just flipped the loaf over on my cooling rack and it looks beautiful. You’d never know it sank in the middle. I love my loaf pan! 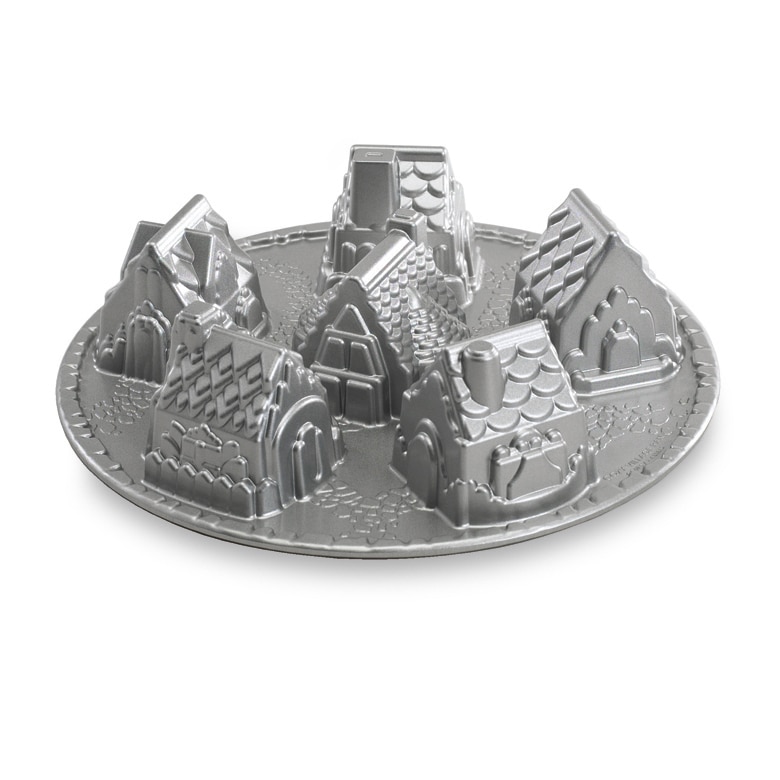 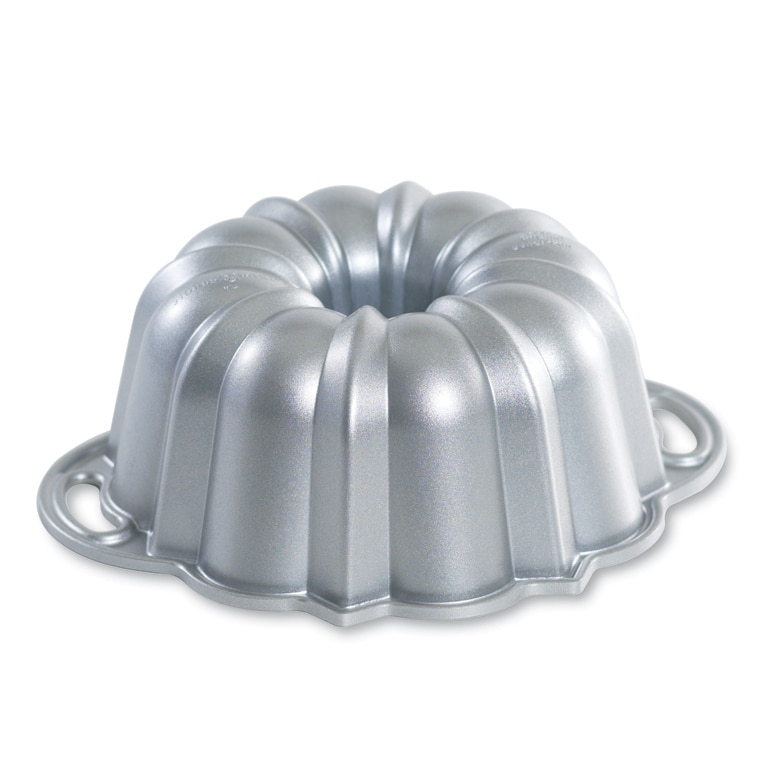