A few years ago I (and most of the country) discovered the book “Artisan Bread in Five Minutes a Day” by Jeff Hertzberg and Zoe Francois. I love the recipes in the book and I think their stored dough technique works well. You store the raw dough in your refrigerator and make a loaf as you need it – it takes about 5 minutes to shape a loaf – hence the title.  But you really have to plan ahead and have the stored dough ready in the fridge for a minimum of 8 to 12 hours. Sometimes I don’t plan that far ahead but want a nice loaf of bread for dinner. 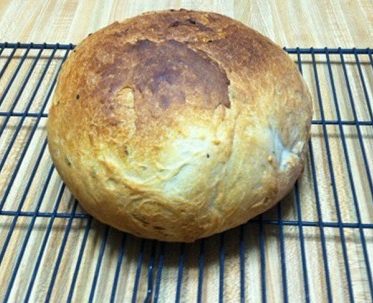 I recently stumbled upon a recipe for Dutch oven baked bread which promised a similar result without the need for the long timeframe. I decided to give it a try using my new Nordic Ware 3-quart ProCast Traditions Dutch Oven. The technique for baking bread in a Dutch oven was devised to allow home bakers to imitate the heat and the steam that professional bakers use to create artisan breads. I did a little research and found multiple versions of the recipe online, including one from the Artisan Bread folks, one from blogger Pioneer Woman and one from cookbook author Michael Ruhlman.

Since, in addition to running the Nordic Ware Cooking Class program, I’m a recipe tester and developer, I couldn’t just leave the recipes alone – I had to try my own version! I borrowed some techniques from the Artisan Bread folks and Michael Ruhlman. The addition of butter and herbs to the recipe came from the Pioneer Woman.  Here’s what I ended up with.

The ingredient list is pretty simple but I like to gather everything together before I begin. If you have a kitchen scale, I recommend weighing the flour. I used 1/2 bread flour and 1/2 all-purpose flour because I think you get a little more tender crumb with the addition of the bread flour. This recipe makes one loaf 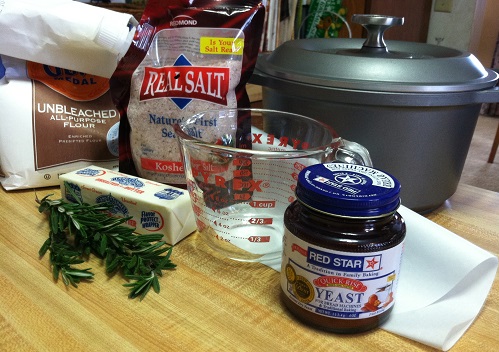 Combine the flour, salt and yeast in the bowl of a stand mixer fitted with a dough hook. Run the mixer briefly to combine the dry ingredients. Add the warm (not hot) water. Then add the chopped rosemary to the melted butter and pour that into the bowl. 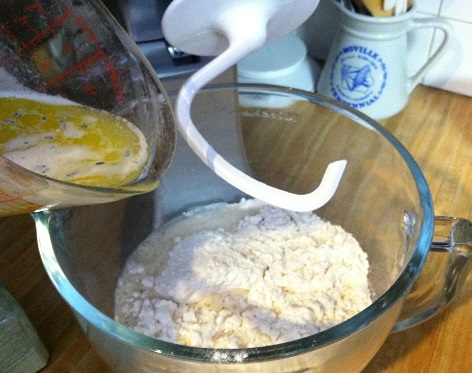 Start the mixer on medium to get the dough combined. You may have to scrape down the sides of the bowl once or twice. When the dough becomes stiffer, reduce your speed to low and mix the dough for 5 to 10 minutes. It’s not a race so don’t be tempted to speed up the mixer to hurry the process – you’ll only risk damaging your mixer. The dough should become smooth and elastic and you should be able to stretch a small piece of it until it’s somewhat transparent (called the “windowpane test”). If it breaks too easily, keep mixing. In my stand mixer it took 10 minutes. 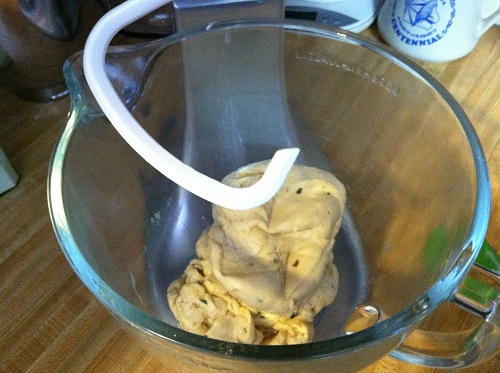 Shape the dough into a rough ball in your bowl and cover it with a lid or plastic wrap. Allow it to rise until it has doubled in size and doesn’t spring back when you push a couple of fingers into it. This should take about 2 to 4 hours depending on how warm your kitchen is. I have a “proof” setting on my oven so I turned that on and put the dough in the oven. It was doubled in size in about 3 hours. It doesn’t speed up rising time that much but it’s a warm, draft-free environment. 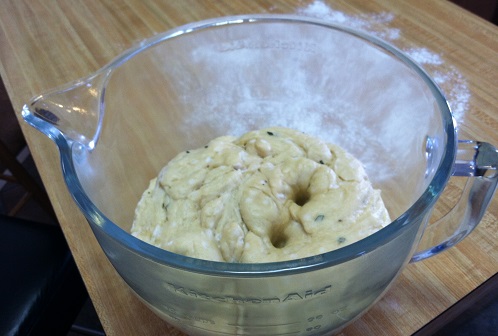 When the dough has risen, place it onto a floured countertop and knead it by hand for a couple of minutes to redistribute the yeast. Using the stand mixer cuts kneading time down dramatically but I still find kneading and turning the dough 8 or 10 times to be a very satisfying hands-on process. 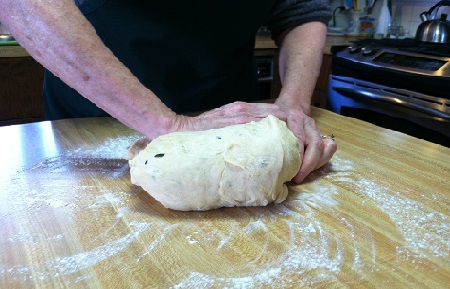 Here’s where I used the technique from the Artisan Bread folks. I shaped the dough into a very tight ball and placed it on a sheet of parchment paper covered with plastic wrap for the second rise, which takes 30 to 60 minutes. Since baking the bread in a Dutch oven calls for the pot to be preheated in the oven, lifting the bread on the parchment paper to place it into the hot pot is safer and helps the bread keep its shape. 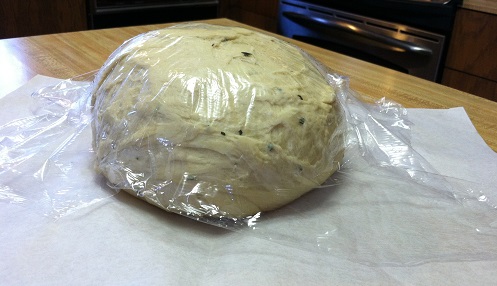 About 20 minutes before baking, put the empty pan with the lid on it into the oven and preheat the oven to 450ºF. 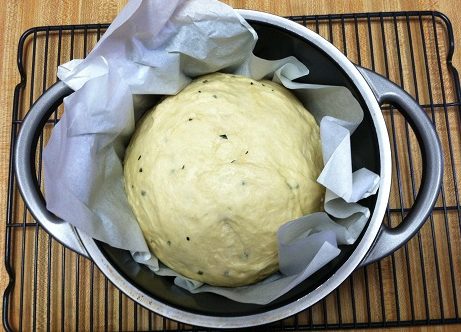 Remove the hot pan from the oven to a cooling rack or heat-safe surface. Lift the edges of the parchment paper and, very carefully, drop the dough, paper and all, into the hot pot. Replace the lid and put the pot back in the oven.  Bake for 30 minutes with the lid on. Remove the lid and continue baking for about 15 minutes more or until the bread is a nice caramel-brown color and baked through. If you have an instant read thermometer, the internal temperature of the dough should be about 200ºF. I never used to “temp” my bread but I find it to be a really reliable way of telling when the bread is done.  Check the temperature after the bread has been out of the oven a couple of minutes as the temperature will continue to rise a bit. My loaf was getting pretty brown on top to I pulled it out of the oven a few minutes early. The internal temperature was 197ºF. 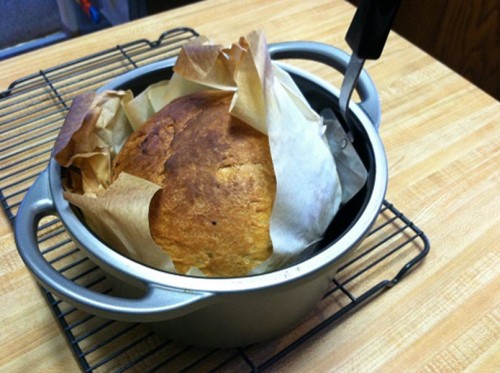 Remove the bread from the oven and take the bread out of the pot with a large spatula. Slide it off the parchment paper onto a cooling rack. It will slice better if you allow it to cool at least 15 minutes – and that’s the most difficult part of the recipe!