We don’t watch a lot of TV in our household. In fact, a more accurate statement would be that we don’t watch ANY TV….that is, until the Olympics are on. Ahh, yes, those two glorious weeks that happen every other year, where our evening entertainment consists of being parked on a sofa in front of the television for 5+ hours each and every night, trying to soak up as much of the Olympic excitement as possible. There’s just something so irresistible about the Olympics, regardless of whether it’s summer or winter games. Seeing people from around the world unite over a shared passion for a sport is a beautiful thing, and is a reminder to all of what we humans can achieve if we remain dedicated to our pursuits. It’s also fascinating to learn more about the people, culture and geography of each host city. And who doesn’t love television programming that is family-friendly for all ages?! (you don’t see that very often!)

Every Olympic games, we host at least one viewing party with friends and family. The recurring dilemma we face is a complex one: What foods do you serve at an Olympics party that are festive and delicious, yet don’t leave you feeling like a beached whale after you’re done? (reference classic Super Bowl fan foods….queso & chips, ‘Lil Smokies, Buffalo Wings with ranch, Doritos…the list goes on and on and is definitely not healthy!) Personally, I feel an inner guilt about munching on buttery soft pretzels and Oreos on my couch while watching athletes at the top of their game compete at their given sport on TV, knowing that they had to forgo junk food to get to where they are at: the top of their game.

This year, an idea came to me for a semi-healthy Olympics themed treat to serve, and it’s a chilly one to match the wintry feel of the games. I spend an awful lot of time staring at and thinking about Bundts (hey, it’s part of my job!), and I’ve always thought they bore an uncanny resemblance to the Olympic rings. (This is probably a contributing factor to why I made colored Bundt Olympic Ice Rings in honor of the 2014 Sochi winter games in a snowbank in my front yard. The neighbors loved my nightly torch lighting (ok, they were candles) ceremony in the center of each one. But I digress…) 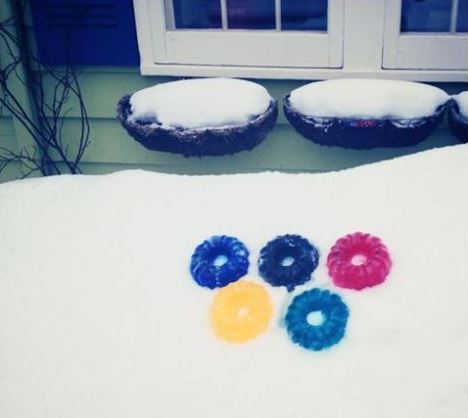 Back to the recipe. What is healthy(ish), colorful, able to be molded in the shape of a Bundt, and makes for a truly Olympic presentation to friends? Frozen fruit! I set out to come up with a simple to make tasty dessert recipe for this year’s viewing party, and came up with the following idea. This recipe is very adaptable and can be changed up to suit your flavor preferences. But here’s a rough outline. 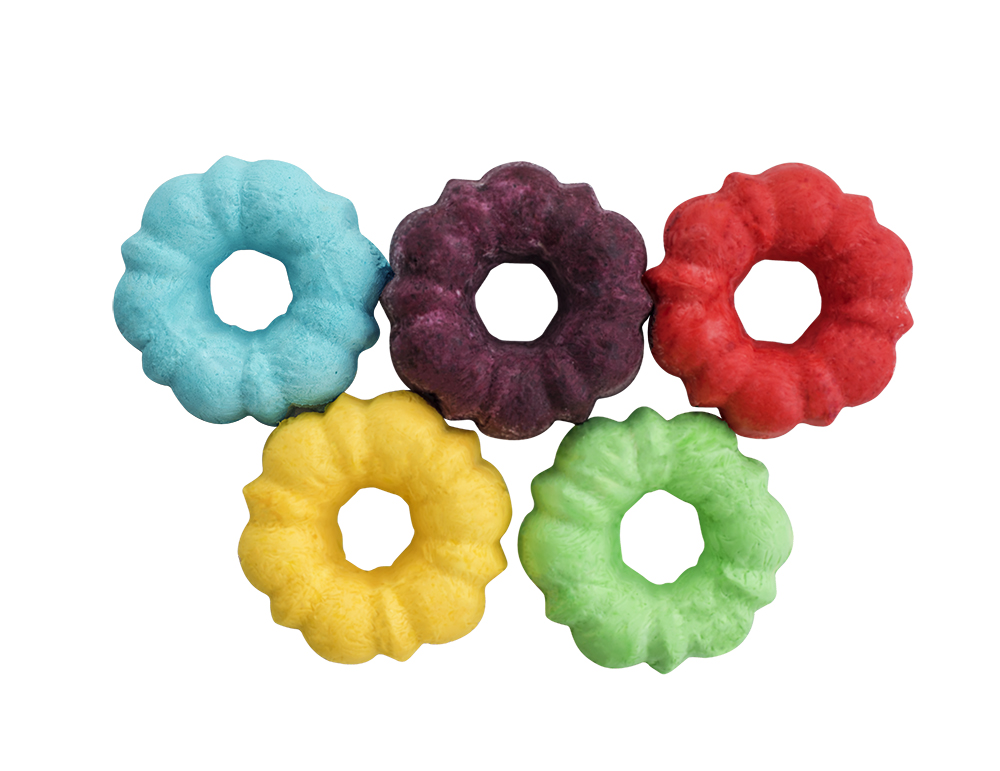 Allow frozen bags of fruit and ice cream to sit out on the counter for 15-20 minutes to soften slightly. They should still be mostly frozen but starting to warm up.  While fruit is thawing, prepare your pans. Cut a small hole in the center of a square piece of plastic food wrap, and place it over the cone in your Bundt. This goes for all sizes of Bundt pan, including the little mini Anniversary pans. Press the plastic wrap as tightly against the pan walls as you can, then set aside.

For each color/flavor, pulse frozen fruit chunks in the blender one flavor at a time. If you have a VitaMix or other powerful blender, use the pusher tool to ensure that the fruit consistency turns into something similar to sorbet. In a medium mixing bowl, stir in two scoops of softened vanilla ice cream to your fruit puree. Once evenly combined, spread into your prepared Bundt pan and use a spatula or spoon to firmly press the mixture into all of the nooks and crannies of the pan. Firmly whack the Bundt pan on a solid surface such as a cutting board a few times, which will settle the ice cream down into the cracks where it belongs. Place the pan in the freezer (or, if you live in Minnesota like us, where nightly temperatures are often below zero, place it on your back porch ?). Repeat with remaining fruit flavors.

For green ring, no need to mix with vanilla ice cream—just soften and spoon into the prepared pan, then freeze.

For blue ring, mix 3 cups vanilla ice cream with Kool-Aid packet until proper color and taste are achieved. You’re right—this one is NOT healthy, but at least it’s the unsweetened variety of Kool-Aid so you’re not OD-ing on sugar! And besides…what foods in nature are naturally Olympic Blue? Yeah, we came up empty handed too…

When it’s time to make your Olympic debut, make sure that the fruit molds have sat in a VERY cold location, such as a deep freeze, for at least 2 hours (overnight is best). Fill a mixing bowl with room temperature water (NOT hot water) and dip each pan in for a few seconds, then remove and lift up on the plastic wrap. The mold should pop right out! A great serving plate for these is a Baker’s Half Sheet. Arrange them nicely and serve them up! We’re betting the folks at your viewing party will want a slice of each.