A group of soldiers’ wives from a nearby US Army base arrived at the restaurant after it had closed for the day.  Not wanting to turn them away, Ignacio quickly improvised a snack using whatever he had available in the kitchen (tortillas, cheese & jalapeno peppers).  He cut up the tortillas, covered them with cheese and peppers and heated them in the oven.  He called them Nacho’s especiales (over time it became special nachos). They were a hit, and soon became popular throughout the southwest, and beyond.

There are many other stories out there regarding the accidental origins of products (Penicillin, Wheaties, Velcro, Slinky, to name a few).  I chose to focus on the above entries because I discovered something fascinating, not only are they all food related, but they all played a role in the success of our company.

Teflon (PTFE):  We were among the first licensees for the application of Teflon back in the 1960s.  Today we apply many different types of non-stick coatings to our products.

Microwave Ovens: As the success of the MW oven grew, we realized the need to develop a line of cookware to work with this emerging technology.  In the 1970s we developed a new line of thermoset plastic molded cookware for microwave use.  Our most unique item was the Micro-Go-Round, an automated turntable.  It’s still one of our best selling items.  Our extensive line of microwave products continues to grow.

Chocolate Chip Cookies & Nachos: Ok, these didn’t exactly play a huge role in the success of our company, but they are delicious!  We do have many baking pans that are used to make cookies, cakes, and yes, even nachos.

In fact, the chocolate chip cookie is featured predominantly on the cover of our new Food Service catalog: 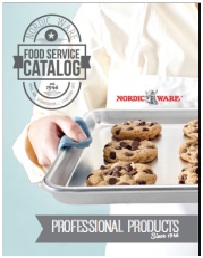 You never know where the next great product will come from.